Lots of great stuff all over the geographic and taxonomic maps!  Tracking Canada goose migrations.  Meadow voles OM-NOM-NOMing on bioenergy crops.  The (lack of) effect prescribed burning has in controlling trembling aspen encroachment into grassland.  A new bee for Canada (beauty cover photo).  A taxonomic distinction between "coywolves" and other wolf and coyote taxa.  And an article with video supplement showing a Cougar scared away from its deer kill by a brave hungry skunk.  All this and more - just browse below! 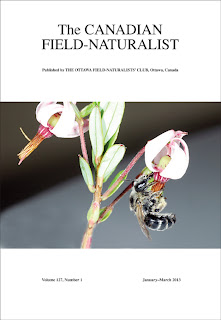 The Ocean Pout, Zoarces americanus, and the Ocean Sunfish, Mola mola: Additions to the Marine Ichthyofauna of the Lower Saint John River System, New Brunswick, with a Summary of Marine Fish Reported from the Estuary (38-43)
Donald F. McAlpine

Last night some sort of planetary transit event must have occurred, because for some reason a bunch of ecologists independently started questioning/venting on Twitter about the abundance of oh-so-slightly-different reference formats between journals.  I happen to love the subject of reference formatting (neeeerd!).  It's like those few times when someone says "Please tell me more about insect classification" - so exciting but so rare.

This post is on the subject of reference formats.  Why are there so many styles?  Are some better than others?  Should there be one style to rule them all?

WE'RE CHANGING OUR REFERENCE FORMAT
The Canadian Field-Naturalist will be changing its reference format in the near future.  Our current format is incompatible with reference management software (e.g., EndNote, Mendeley) that more and more authors are using (with good reason - they're great).  So we'll be changing to a straightforward reference format and providing an EndNote style file on our site to benefit authors using EndNote.  I also intend on supplying a Mendeley style file some time, but that's a trickier task.  Expect our new reference format in the next few months.

WHY ARE THERE SO MANY REFERENCE STYLES?
Each journal chooses its own formatting style.  There are a shocking number of tiny decisions that go into a format.  Should the volume number be bolded?  Should the year be enclosed in parentheses?  Should author names in the References section be displayed as:

Given so many choices, most journals' formats differ from each other in one or two small ways.

ARE SOME STYLES BETTER THAN OTHERS?
Yes.

COULD YOU ELABORATE PLEASE?
1) Space-saving formats (are really annoying)
Omitting article titles from references, using journal abbreviations, and using numbers instead of author names in citations all have the effect of reducing text and thus saving space and money for publishers.  However, the benefits of these space-saving approaches have diminished in recent years as journals are disseminated more online, where pages are free.

What do ecologists think about these types of formats?


@cbahlai I'm with you! I know it looks cleaner, but I prefer seeing the author names cited in-text so u don't have to jump b/w text and refs
— Andrea Kirkwood (@KirkwoodLab) July 15, 2013

Reducing information about a reference (e.g., omitting article titles, using journal abbreviations) is not only annoying but reduces the likelihood of finding the correct reference.  References frequently have errors (Aronsky et al., 2005).  If there is some redundancy in reference information in a journal format then a reader can still track down the article despite an error (e.g., the journal name was listed incorrectly but the authors and article title were correct).  Journal abbreviations are the spawn of Satan (Fitzsimmons, personal communication to himself 2013).  There is no authoritative list a poorly-known list (EDIT: thanks to Alex Bond @thelabandfield for notifying me of the list) of how journals should be abbreviated, so everyone does it differently, and abbreviation errors are extremely common (Aronsky et al., 2005).

We will include article titles and full journal names in our new reference format.  Because we're not jerks.  We also won't have our article titles in all-caps, like one of our peer journals, because that's rather shouty.


Evolution (the journal) needs to stop shouting at everyone.
— Thomas White (@TomEdWhite) July 14, 2013


That's. About. It.  It seems that journals' formats are based not on experimentally demonstrated superiority of one style over another, but on the way the journal has done things for years (Wager & Middleton, 2002).  There are valid considerations for style that may vary between journals (Hartley, 2002), but frankly I don't think many editors give a damn (it's journal content that usually excites them, not formatting details, and appropriately so).

SHOULD THERE BE ONE REFERENCE FORMAT TO RULE THEM ALL?
For decades researchers have lamented how silly it is to have scientists waste so much time on formatting idiosyncrasies. Below are a sample of such editorials/essays/articles, followed by the only counter-argument against universal reference styles I have yet found.

ONE (OR A FEW) UNIVERSAL STYLES: HOW DO WE GET THERE?


Rather than a top-down decision by some authority, I think converting to a small number of reference styles could be accomplished easily, starting with the mega-publishers. The mega-publishing companies run a huge number of scientific journals (see Morris, 2007 for some already-dated analyses).  If one or a few of them decided to use a standard style, that would go a lot of the way toward universality.  Independent journals, such as The Canadian Field-Naturalist, could choose at our discretion to use whatever style the bigshots adopt.  As more journals pile on, the costs of not adopting the style would emerge as authors might avoid submitting to journals that require unique formatting.

CONCLUSION
Scientific journals are full of well-researched content, but the format of the journals themselves is often the product of arbitrary choices made years ago rather than critical assessment of costs and benefits.  We'll change to a simple reference format to aid authors (easy to write), readers (we'll include full titles of articles and journals), and machines (gotta prepare for our text-mining overlords).  If a universal style comes out that meets our minimal criteria, we will gladly switch to it.  And if such a standard style is developed, hopefully it goes better than this XKCD comic (tweeted to me by librarian @dupuisj):

Hartley, J. and L. Betts. 2007. The effects of spacing and titles on judgments of the effectiveness of structured abstracts. Journal of the American Society for Information Science and Technology 58:2335-2340.

Wager, E. and P. Middleton. 2002. Effects of technical editing in biomedical journals. Journal of the American Medical Association 287:2821-2824.
Posted by The Canadian Field-Naturalist at 1:15 PM 3 comments: Links to this post