Our latest issue was published earlier this month. I'm a little late posting the table of contents on our blog - things have been hectic publishing so many issues so quickly.  It's a great "problem" to have!  Our next issue is scheduled to be published in two weeks, which will make us FULLY CAUGHT UP IN OUR PUBLICATION SCHEDULE!  Which I may have just jinxed by publicly expressing hope.

Volume 127 issue 3 has something for everyone, and its articles have attracted significant (yup, P<0.05) media attention.  The research articles include: 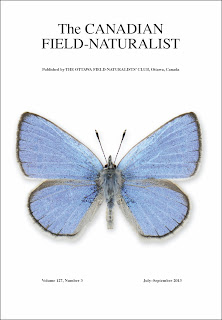 An alvar race of the  couperi  subspecies of the Silvery Blue (Glaucopsyche lygdamus couperi) in Southeastern Ontario? (224-228)
Paul M. Catling,        Ross A. Layberry


News and Comment
--------
Using Coefficients of Conservatism and the Floristic Quality Index to Assess the Potential for Serious and Irreversible Damage to Plant Communities (285-288)
Paul M. Catling

Revisions to the OFNC Constitution and By-Laws; The Society for Integrative & Comparative Biology Annual Meeting 2014 (288)

Posted by The Canadian Field-Naturalist at 11:26 PM No comments: Links to this post

We have received great media attention over the past week or two. We’ve learned a lot about how to generate media interest along the way, thanks to helpful advice from several people, including Jenny Ryan (Communications Manager, Canadian Science Publishing; @JRyanCSP) and Tyler Irving (Media Officer, Science Media Centre Canada; @tylereirving).

MEDIA ATTENTION ON NEW RACE OF BUTTERFLY FOUND IN ONTARIO

Our latest issue is full of great research.  That includes two research articles authored by teens.  It is inspiring to see teens so driven by curiosity and love of science that they not only do solid research but also take the next step and publish it, so their discoveries can be shared.  We drafted the following press release in the hopes that media will cover the story of these teens and their research.

Ottawa, Ontario – We know more about wildlife this week, thanks to research by two Canadian teens. Teens from Ottawa and rural British Columbia published their research in this week’s issue of a scientific journal, The Canadian Field-Naturalist. Their research on wasps and leaf disease reveal that a Canadian wasp is an efficient killer of an agricultural pest, and a little-known fungus is hurting Highbush Cranberries. Both research articles were subject to the same peer-review process and met the same scientific standards as articles authored by professors and other professional scientists.

Adamo Young is a grade 12 student in Ottawa who loves science. Young found a mentor in Dr. Peter Mason, a Research Scientist at the Experimental Farm in Ottawa. Young’s research focused on an agricultural pest and the wasps that kill it.

The Diamondback Moth invaded Canada a long time ago, and brought with it an appetite for crops such as cabbage and canola. Researchers have known for years that two Canadian wasp species can kill the pest moth. The wasps lay their eggs in moth caterpillars, then the baby wasps grow up eating the caterpillar from the inside out until the wasps emerge from the caterpillar, killing the caterpillar in the process. “It’s kind of like the movie Alien,” Young explained.
While researchers knew these wasps kill the moth pest, they didn’t know which wasp was more effective under different conditions. Young designed and performed experiments to see which wasp is better at controlling Diamondback Moth populations under various conditions. He found that one wasp species was a tireless killing machine, whereas the other wasp was only effective at killing moths under limited conditions. The results will help farmers and greenhouse operators combat the moth pest without the need for pesticides.
“My research won first prize at the Ottawa regional science fair, and two of the judges were editors of The Canadian Field-Naturalist. They said my research was good enough to be published.” So Young wrote his research as a scientific paper and submitted it. “It’s pretty cool to say you’ve published a scientific paper,” Young said.

Kiri Daust’s research on plant disease started the same way many biologists’ projects start: with a walk in the woods. “I go walking in the woods with my family pretty much every day,” explained Daust from his home in Telkwa, British Columbia. “We collect Highbush Cranberries to make jelly.” In 2012, Daust noticed a weird disease on the plants.

Rather than shrug off the finding, Daust followed his curiosity. He sent pictures of the disease to an expert who identified the culprit as a rare kind of rust fungus about which experts know little. The fungus was known to infect Highbush Cranberry, but nobody knew what effect it had on the plant. Daust, aged fifteen at the time, decided he would answer that question.
Daust photographed the leaves of plants with different levels of infection, and checked back on the plants as the season progressed. He found that plants with higher levels of infection produced berries that were infected, undeveloped, and had less sugar than uninfected plants’ berries. He dug deep into historical records and found an interesting pattern: the fungus may attack Highbush Cranberry the most after wet spring weather. Wet springs are predicted to become more common in Daust’s region of B.C., which does not bode well for local berry pickers or wildlife. “This year, there is tons of rust on the plants and there are hardly any berries,” Daust explained.

While Young had to search to find a scientific mentor, Daust’s mentor was in his house. Dr. Karen Price is an ecologist and Kiri Daust’s mom and homeschool teacher. “My role is simply to encourage Kiri’s curiosity,” Price explained.
Like Young, Daust first presented his research at science fairs, where he won many awards. Local scientists recommended Daust publish his research in The Canadian Field-Naturalist, to share his findings with the scientific community. “Sharing knowledge of the world, that’s kind of the purpose of science,” Daust explained.

Both teens had plenty of exposure to nature as kids. Young was a member of the Macoun Field Club, an Ottawa club for youth who love nature. Daust grew up in an off-grid cabin in the forests of central B.C.; without computer access his questions came from the wildlife around him. Both teen scientists recommend teens should try doing a science fair project on a problem that matters to them. And, as Young suggested, “if you’re interested in science, just do it.”