It seems too good to be true for us insect enthusiasts.  A new beetle field guide that is free.  No asterisks of any sort.  Just free heavenly insect goodness.

PUBLISHER:
The Canadian Food Inspection Agency, in conjunction with the University of Guelph, Ontario Ministry of Natural Resources and the Invasive Species Centre.

WHAT ARE JEWEL BEETLES?
The beetle family Buprestidae are known as jewel beetles for their beautiful irridescent colours. Their larvae burrow in plants, including the dastardly invasive Emerald Ash Borer (dunh-dunh-DUUUN).

WHAT DOES THE GUIDE LOOK LIKE?
I won't provide a full book review, but the picture below indicates some of the interesting doo-dads the book has for its species pages. 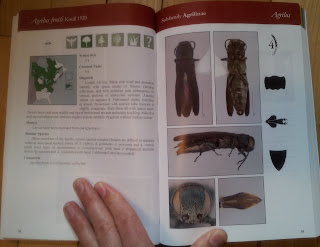 Silhouettes of the actual size of the species; ID focal points; buttons to indicate larval host plants; etc.  I like the layout.  Personally, I would like to see a "Natural history notes" section for each species with a brief note about the species' habits (like in co-author Stephen Marshall's incredible book on the insects of Eastern North America). However, I can understand the lack of such information since: a) such information is likely unknown for many of the species and b) the book is intended as an identification guide only.  Its identification keys, for example, are wonderful.

FREE, YOU SAY?
The Canadian Food Inspection Agency often makes it identification guide books freely available.  For a group with many pest species, such as the jewel beetles, it likely pays off to have ID guides in the hand of lots of Canadians.  This jewel beetle guide is free, as is its shipping, to people in Canada or anywhere else the USA.  Supplies are limited.  To place an order, call 1-800-442-2342.

The Canadian Food Inspection Agency, in conjunction with the University of Guelph, Ontario Ministry of Natural Resources and the Invasive Species Centre, has recently published the “Field Guide to the Jewel Beetles of Northeastern North America”.

This 411 page field guide (6×9*) covers 164 jewel beetle species for northeastern North American (Manitoba and eastward) and includes 2 identification keys for the 23 genera in the region: one a technical key adapted from previously published works, and the other a “field key”, designed for use with a hand lens or digital camera and which uses characters that are more easily observed.  Each species is fully illustrated with high magnification colour photos of the dorsal & ventral views, head and male genitalia (plus additional colour morphs or variations when available).  A review of taxonomic synonyms, ESC & ESA approved common names, and all known larval host plants is provided in addition to thorough morphological diagnoses, characters useful for differentiating similar species, and notes on species abundance, habitat preference and economic importance.

This guide is intended to assist municipal foresters, arborists, technicians, entomologists, woodlot owners and naturalists in recognizing specimens encountered in the field.

Good news & bad news for those of you wanting a copy of this guide.

Bad news: So many people wanted hardcopies of the guide that they've almost run out of them. There is not enough money to ship copies to people outside Canada and U.S.A.

Good news: pdf copies of the guide are available for free, in English or French. For pdf copies, and details about how in-demand the guide has been, see this blog post by co-author Morgan Jackson.
Posted by The Canadian Field-Naturalist at 2:54 PM