I'm thinking of highlighting one or a couple of articles in each new issue of CFN.  Depending on how ambitious I get, I might even have a Q&A session with some of the authors to give the "story behind the story" on how they did their research and why.  These are just ideas right now - don't hold me to them.  But I will at least discuss one article in 125-1 that deals with a very cool subject: Tardigrades (also known as water bears because they kinda sorta look a little like bears under the microscope).

My friend Matt Boeckner (who published a 2005 article on tardigrades in CFN) first introduced me to tardigrades a few years ago in Newfoundland.  "THEY ARE AWESOME!" he told me, but I was skeptical.  I studied Daphnia zooplankton at the time, and everyone knows nothing can be more awesome than Daphnia [citation needed to support my unreasonable opinion].  But the more he told me about tardigrades, and the more I learned about them since then, the more I realized that they truly are amazing because of how tough they are.  They can withstand conditions too extreme for almost any other animal, including desiccation, extreme heat, extreme cold, radiation, and even outer space.  They make cockroaches look dainty by comparison.

Gary Grothman surveyed the tardigrades of Fish Creek Provincial Park, Alberta.  Considering most tardigrades are too small to see with the naked eye (almost always smaller than one mm long), this isn't exactly birdwatching, or even butterfly collecting.  This takes patience.  Basically, he took tardigrate-inhabited material (e.g., moss) and dried it, then soaked it in water and poured the water through very fine screens to collect tardigrades, then he examined the tardigrades under a microscope to identify them.  He found a number of species, including eight new to Alberta and two new to Canada.  People seldom have affection for little invertebrates, but biodiversity isn't just charismatic polar bears and falcons; it includes the full diversity of life.  It is nice to know people like Gary are investigating the diversity of charismatic but tiny nature in Canada. 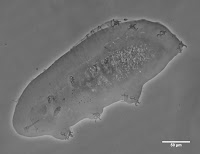